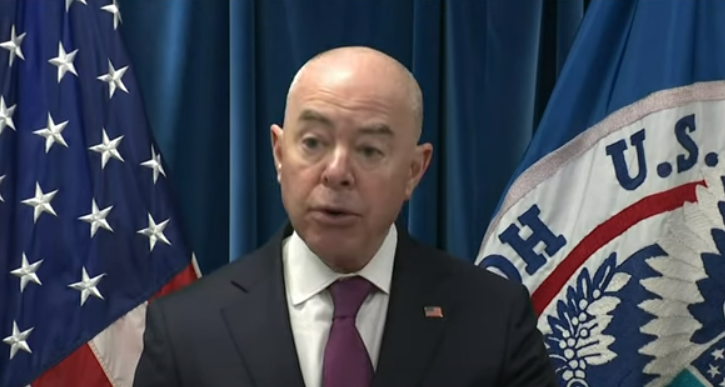 The Biden administration’s handling of the current surge in illegal immigration along the U.S. southern border has been nothing short of disastrous. And at the helm of this fiasco is Homeland Security Secretary Alejandro Mayorkas, whose policies have been widely panned by border state lawmakers, who are now demanding he “pivot” how he is handling the situation.

In a letter to Mayorkas, 11 Texas GOP lawmakers — led by freshman Rep. Morgan Luttrell — noted that there has been a record level of illegal immigration during the Biden administration and under Mayorkas’ leadership, arguing it unfairly burdens Texas.

“While you live in Washington, D.C., far from the chaos the Biden Administration has created, border states suffer. Our cities are overburdened, flooded with illegal drugs, and inundated with crime,” the letter stated.

The lawmakers accused Mayorkas of willfully failing to maintain border security and violating the Secure Fence Act of 2006, a federal law that requires the DHS secretary to secure the nation’s international land and maritime borders.

Customs and Border Protection (CBP) sources have reported that the number of migrant encounters in December surpassed 250,000 for the first time on record. That is in addition to more than 70,000 “gotaways” at the border in December alone. FY 2022 as a whole saw nearly 600,000 getaways – illegal immigrants who slipped past Border Patrol agents.

The administration has blamed poverty, corruption and climate change for fueling the crisis, and has sought to expand legal pathways for asylum. But Republicans have argued that the real issue is the Biden administration’s refusal to enforce immigration laws.

“We must reimplement President Trump’s border policies that led to the most secure border in 30 years. We must give our border patrol and customs agents the funding they need. We must update our decades-old immigration laws so that our laws incentives legal immigration and disincentives illegal immigration,” the lawmakers wrote in their letter.

In other words, the Biden administration must stop encouraging illegal immigration and start enforcing immigration laws. Unfortunately, Mayorkas seems to be more interested in pushing a liberal agenda than in securing our borders. And until he changes course, the U.S. will remain vulnerable to illegal immigration.

Wednesday night the GOP moved to impeach Mayorkas. House Speaker Kevin McCarthy just put Georgia Rep Majory Taylor Green on the Homeland security committee. That puts her in a position to move for impeachment and I don’t think she plans to miss that opportunity.