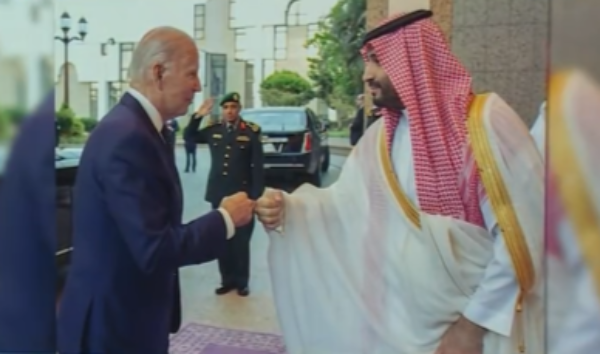 It looks like the shine has finally worn off on Biden for the fake news team at CNN after he practically approved a license to kill for the world’s most egregious figurehead—The Saudi crown prince.

Jake Tapper concluded his Sunday broadcast of “State of the Union” with a monologue addressing the fact that the Biden administration had determined that — under international law — the Saudi Prince Mohammed bin Salman has immunity in the 2018 murder, which Biden has said the prince ordered.

“A few weeks ago, The Wall Street Journal reported that MBS ‘mocks President Biden in private, making fun of the 79-year-old’s gaffes and questioning his mental acuity,’ according to people inside the Saudi government. Nothing gets leaked by the Saudi government to The Wall Street Journal without MBS signing off on it, President Biden,” Tapper began.

“What are you — what are we — getting in exchange for letting this thug get away with murder, Mr. President?” Tapper asked. “Other than the stink of complicity?”

Biden vowed to make the Saudi murderer pay, only to cuddle up close to the crown prince and snap as journalists dared to question his motives. Tapper played a clip of Biden shouting at journalists, “why don’t you guys talk about something that matters?” as they asked Biden to explain his sudden flip.

It wasn’t just CNN, the Washington Post publisher Fred Ryan criticized Biden when the news was first reported, accusing the president of effectively granting bin Salman a “license to kill” in a blistering statement published Friday.

“In granting legal immunity to Saudi Crown Prince Mohammed bin Salman, President Biden is failing to uphold America’s most cherished values. He is granting a license to kill to one of the world’s most egregious human-rights abusers who is responsible for the cold-blooded murder of Jamal Khashoggi, a Washington Post columnist,” Ryan wrote.

Ryan went on to note that King Salman had named his son — the crown prince — prime minister in an effort to use international law to shield him from the consequences of his actions.

“By going along with this scheme, President Biden is turning his back on fundamental principles of press freedom and equality. The American people – and those wronged by MBS in Saudi Arabia and around the world – deserve better,” he concluded.

Biden clearly sold his voters out when he promised to make the crown prince a pariah for murdering an American journalist but quickly changed his tune once in office. It’s taken until now for liberal media to say anything about it.

I think it’s interesting how they only spoke up about it now that the midterms are over.